If you do a lot of cooking over a fire like Staple does, you need a way to get things off and on the fire without hurting yourself.

One way is to just use an apron or tea towel folded over itself a couple of times to pick up the item. This barrier is enough to move items a short distance, if done right and carefully.

We decided that we also wanted to make a fireglove.

Based on the Museum of London’s extant 15th century worker’s glove (As seen here), which was a leather protective mitten, we mocked up a similar design. For practical purposes, as you are more likely to hold the pot in the left hand as a right-handed person and stir with the right, we made it left handed.

Hugh went to the Museum of London and was able to take some really good photos of the glove, which really show the details of the glove. 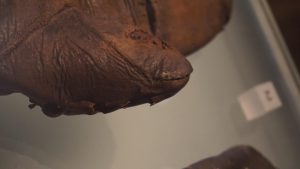 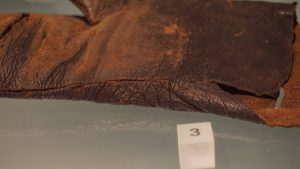 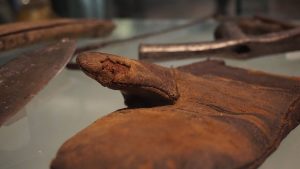 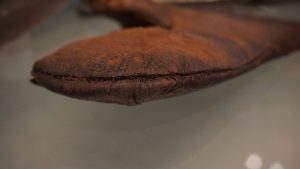 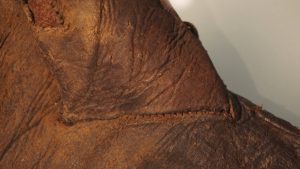 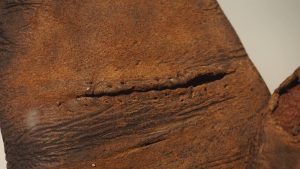 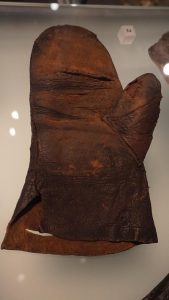 We chose to further insulate our version by adding a wool layer and lining it in linen. Then we added a strap to the corner so we could hang it off the fire box and it wouldn’t be left on the ground.

There is a Swedish fragment of what could be a left handed mitten dated 12th-13th century.

Another Swedish 14th century glove is in the Stockholm museum 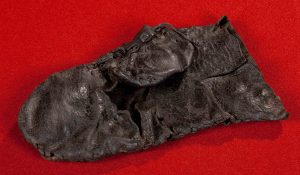 This glove appears to have been stitched together with thonging, rather than the tight stitching of the MoL glove.