On July 2nd and 3rd, Company of the Staple was once again invited to attend the annual Winterfest show held at Parramatta Park.

A report of the great deeds of arms performed at Winterfest by the noble Order of the Heron, courtesy of Aldyn de Sutton (aka Elden): 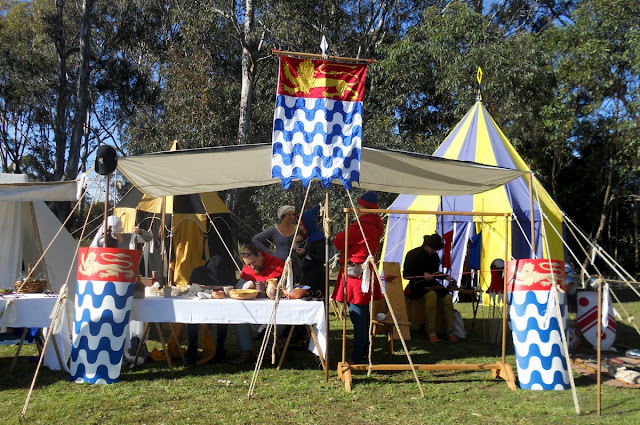 In the year of Grace, 2011, during the long reign of King Edward III, on feast of Peter and Paul, in the parish Matta, knights and squires of the Order of the Heron held hastiludes by the permission of the king in those fields. Three lords of the Company of the Staple at Calais, all meaning to journey to the distant lands of Abbeystowe to undertake great deeds of arms, had decided to travel together for their mutual improvement and good company on the road. That all would know them well, they bound their affinities into an Order of the Heron, dressed themselves in livery of gules and azure and prepared themselves for a long expedition to distant lands.

Making his own way to Abbeystowe through parish Matta was Sir James Stallard, knight of England and also Lady Emma of Pioch and Lady Lisa Farrell. 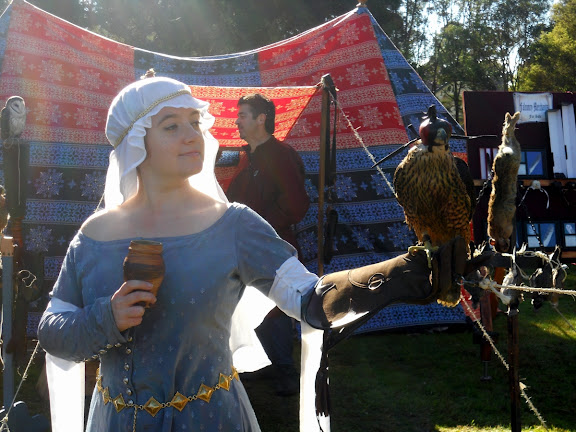 On receiving Sir Stallard, the lords of the order of the heron arranged to hold hastiludes there before the journey to Abbeystowe. After Sir Stallards affinity had encamped and been shown hospitality, the lords were dressed in their armour by many good and able varlets and all went onto the field to seek glory in deeds of arms.
First did Aldyn de Sutton challenge the lord Russel Carrol to lay three strokes with shields. The lords struck once each before de Sutton laid a blow so forceful on the head of lord Carrol that his helmet sheared loose and reeled down to cover his eyes. Impaired such as he was by this mighty blow, lord Carrol yielded the field.

Hugh de Caleys then sought Sir James Stallard to lay three blows with longswords. Both fought gallantly, and with such furious intensity that two blows were quickly struck by de Caleys followed directly by one resounding blow by Sir Stallard. With all honour of the contest carried in the next blow laid, both launched sudden master strokes to each other with no regard for their own defense, and in the coincidence, struck each other dreadfully in the same moment and then fell back. With neither lords or the presiding herald able to rightly say which blow had struck first, the winner could not be decided and the  honourable herald, John Locke, declared that with both  men so shaken by the blows received that to preserve both gallant lords, the next stroke laid would in fact decide the victor. When both could again stand ready, it was Sir Stallard who first struck, and who triumphed of it.

After brief respite could be made, lord de Sutton challenged lord de Caleys to lay blows with longswords until one was forced from the field. They swung stout blows in many gallant assaults until de Caleys, having struck his opponent many times with devastating effect, closed and deftly grappled the arm of de Sutton such that he was compelled to release his own sword and was driven disarmed to the ground and yielded.

At this time it was the pleasure of the noble spectators to view a tilting match in that field at parish Matta and so no more blows were struck on foot until the morrow. In concluding the valiant deeds of the day, Hugh de Caleys was given first place by the pure and honourable ladies, witness to the deeds, for his performance on the field.

On the morrow of the feast of Peter and Paul, the lords Carrol, de Caleys, de Sutton and McKinnon once again took the field with their guest Sir Stallard to do great and valorous deeds of arms.
Russel Carrol began the day’s deeds by challenging de Caleys to three strokes with shields. Lord de Caleys struck his opponent two stout blows before Carrol answered with a resounding blow to the temple, which gave de Caleys much pause. Carrol graciously allowed his opponent a moment to regain his full faculties before they launched fresh assaults and de Caleys landed a third and final blow.
Sir Stallard issued challenge to de Sutton to a match of longswords. Sir Stallard amazed and delighted those present with such blinding assaults that his opponent rarely guessed from whence his next attack might come, and in time he beat de Sutton to the ground and claimed victory.
Lord de Caleys then challenged Sir McKinnon to three strokes with longswords. The gallant lords laid mighty strokes with such force that as de Caleys was struck, the point of his spaulder burst asunder and his armour was knocked off. Undeterred by his being  exposed to great dangers de Caleys only fought harder still, striking his three blows
first to be the victor.
Invigorated by his victory, Lord de Caleys sought no respite or even repair of his harness, but did valiantly challenge Sir Stallard also to meet him with longswords and lay blows until one yielded the field. Eagerly did Sir Stallard meet the challenge, and many blows were exchanged with neither man seeming to get the advantage of the other. Finally Sir Stallard judged that he had caught his opponent misfooted and quickly closed to throw him down. Lord de Caleys resisted the effort and for a long moment none could say whoever of the two might fare the worse, but it was Sir Stallard who in deed lost his feet and tumbled, making de Caleys the victor.

Lord de Sutton then challenged Sir McKinnon to lay strokes with longswords until the victor may bear his fellow to the ground. As they laid resounding blows upon one another, Sir McKinnon’s fine belt of plaques was struck from his person. Finding no shame in it, Sir McKinnon rather bade his opponent do worse if he would seek to strike
him bodily.

With more blows struck, Sir McKinnon closed on de Sutton seeking to throw him from his feet but, finding him as if an immovable hillside, was himself borne to the ground by de Sutton. As the herald called a victory, the lord de Sutton rose to declare that he himself
had met the ground with McKinnon, and that the result was indeed a tie. Moved by his humility, the ladies there declared that de Sutton was the champion of the second day.

Aldyn is heralded the victor

The deeds concluded, the lords withdrew to lodgings to pack and provision for the great journey to Abbeystowe and eagerly plan for the honourable challenges that lay ahead of them.