TO MAKE QUINCE MARMALADE, take quinces and peel them, then cut in quarters and take out the eye[114] and the seeds, then cook them in good red wine and then strain through a strainer: then take honey and boil it for a long time and skim it, then put your quinces in it and stir thoroughly, and keep boiling until the honey is reduced by half; then throw in powdered hippocras, and stir till cold, then divide into portions and keep it.

Normally when I do a redaction, I like to put the original recipe, the translation, the redaction,  and then my story about making it or about how things didn’t turn out quite the way I expected them to, or some random funny story about how I convinced several people over the years that one of our most experienced and talented cooks was continually forgetting a key ingredient by never mentioning that I added something I shouldn’t have while her back was turned. Bene Yfryed

But I’m not doing that this time because this redaction didn’t turn out the way I had hoped and so you probably shouldn’t use it.

I love quince paste. Quinces are only available in late autumn/early winter and they aren’t exactly a big seller so I have been meaning to try and make quince marmalade and get through to end of winter every year and go “damn, I think I missed quince season”

But, my new meat and random produce shop sell quinces and I happened to be in there buying meat and yay! Quince season!

The first attempt went super badly. I bought the quinces without thinking about step 1, which is, when am I actually going to cook these?

This is a failing of mine, I get excited and I don’t think about the practicalities of “you are literally not home for more than two hours aside from sleeping for two weeks, do quinces last that long?”

Well the quinces I bought did NOT last that long, with one going terribly mouldy. So, threw them all out, waited until I had a free Saturday, and bought another kilo.

Step 2 should have been “look up other people’s redactions, look at other versions of quince paste/marmalade (see form of curye version at end of post), have an understanding about what quince marmalade truly is before attempting. Which I didn’t do because honestly, that’s the boring part of medieval redactions and Le Menagier de Paris has proven to be quite simple in the past so how hard could it really be? How hard could it be?!?!!

And really the first part was very straightforward. I took my kilo of quinces (which was like four quinces, they are quite big really), and I peeled them 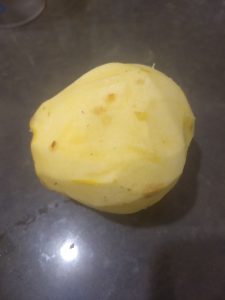 And then I cut them into little bits removing the “eye” which is the seedy bit inside the quince and the stem where it attaches to the tree. 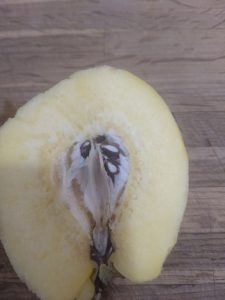 Pretty sure this is the eye

All going very smoothly so far! I then poured a bottle of a lovely red wine into a saucepan, added the quince bits (I cut them into more than quarters based on the assumption that quinces are probably bigger now than they were 650 years ago) and simmer the quinces until they were soft and felt like they were strainable. (45 minutes later)

And then it all started to get a little tricker.

So, tried to use a metal mesh strainer at first – did not work. Lightbulb moment, right, cloth strainer. Did not have muslim or cheesecloth which is the correct tool for the job. So had to use a cotton tea towel. With a lot more effort on my part than the muslim would have been (Example like 35 on the “Doing things the medieval way is actually easier than trying to do things in a modern way that look kind of like the medieval way but are really not” list)

But the tea towel did produce the rich, beautiful dark red liquid that is the, heh, quince-ential quince paste colour. (I forgot to take a picture of this bit 🙁 )

I’m left with two things – the rich red liquid, and the dry quince lumps. The next part of the recipe goes

“then take honey and boil it for a long time and skim it, then put your quinces in it and stir thoroughly, and keep boiling until the honey is reduced by half; then throw in powdered hippocras, and stir till cold, then divide into portions and keep it”

And I suddenly realise I don’t know which bit counts as the quinces. Which may seem silly. Because on the one hand – this is obviously the red juice that I’ve just spent half an hour straining out of the lumps. And yet… marmalade has lumps. Jelly has no lumps, marmalade has lumps of fruit. Is this a translation thing? Why did I never learn to read medieval French? Am I supposed to put the lumps and the juice into the honey or just the juice? Should I add some of this wine back? They wouldn’t have just tossed the wine, (Our dear friend Monsieur Paris is notoriously frugal and cheap. He would never just throw away wine.) It must be used for something, but does it go back into this?

Okay, well, I have 800 grams of honey. That’s more than enough. I’ll split the honey into two saucepans, add half the juice to one, and add rest of the juice, the fruit bits and half the wine to the other one. And then we’ll see.

Modern honey is already pasteurised so I did boil it for a while but not enough to reduce by half. Added the ingredients as per above, boiled it some more, and then added 1/2 tsp of ginger, clove and cinnamon to each saucepan. Boiled it a little more. Stirring consistently the entire time.

Turn off the saucepans and stir some more as it cools. 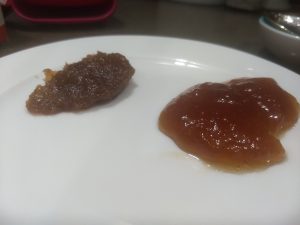 On the left, the one with lumps and wine. On the right – quince juice only.

First of all what I noticed is that the one with just the juice has too high a honey ratio. It was basically flavoured honey. It did have a lovely colour though and would be nice on bread. It did however, have more of the “divide into portions” kind of consistency.

The one with the wine and the solid tasted a lot better – had a lot more of the “quincey” taste that I expect in quince paste. The increased other ingredients diluted the honey taste, allowing more of the quince flavour through. It’s still overly strong to have itself, needed to be paired with a strong cheese.

If I was to redo this, I’d do it like the following

Strain the quinces (reserving the wine) through a cheese cloth.

Put the honey into a fresh saucepan and bring to a boil. Allow to boil for 10 minutes before adding the quince juice, quince solids and a cup of the reserved wine. Boil until the wine is absorbed into the paste, add the spices, and then allow to cool, stirring constantly.

Once cooled, put into a container and place into the fridge, pair with a good cheese or bread. `

Another version from Forme of Curye.

CONNATES [1]. XVIII. Take Connes and pare hem. pyke out the best and do hem in a pot of erthe. do therto whyte grece that he stewe ther inne. and lye hem up with hony clarified and with rawe zolkes [2] and with a lytell almaund mylke and do therinne powdour fort and Safron. and loke that it be yleesshed [3],