168 – Sawge yfarcet. Take pork and seeþ it well, and grinde it small, and medley it wiþ aren and bride grated. Do þerto powder fort and saffron wiþ pynes and salt. Take and close little balles in foiles of sawge; wete it with a batour of aryen and fry it, and serve it forth.

Sage Meatballs. Take pork and cook it well [seems mostly to be cooking in liquid] and grind it small, and mix it with eggs and breadcrumbs. Add strong spices and saffron, with pine nuts and salt. Make little balls out of the mix and around them wrap it in fresh sage leaves. Make a batter of eggs and flour, dip the balls into this batter, fry it in oil and serve it forth. 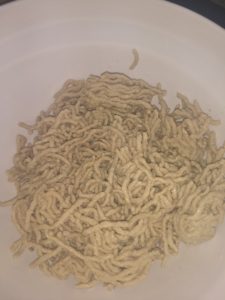 Bring broth to boil in large saucepan. Add the pork mince and wait until fully cooked – no pink bits at all. Should be a dull grey colour.

Strain the meat out, and put in a food processor to get the meat very finely chopped. 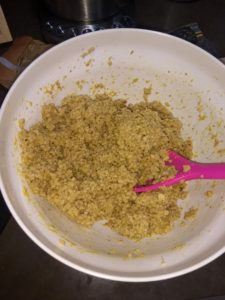 After spices and saffron have been added

Put in a bowl, add the eggs, breadcrumbs, spices and pine nuts and mix together. Add another egg if the mix isn’t wet enough. Wrap sage leaves around the outside.

Make up the egg/flour batter in a separate bowl and then dip the eggs into the batter.

use an oil with a higher smoke point, like rice bran oil and shallow fry the balls. They don’t need long, just a minute or so each side, and then put them on a paper towel on a plate. 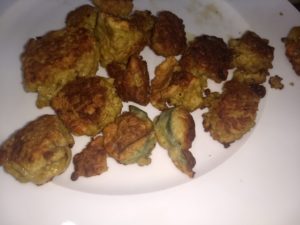 Every now and then, I get in a bit of a challenge mood. I should set out to redact and recreate all the recipes from Forme of Curye! It’ll be great! I’ll find new great recipes to add to the collection, and find better ways of doing things as I challenge myself to cook dishes that I’ve decided against before.

Which is how we got here, to redacting recipe 168 Sawge yfarcet (aka sage pork meatballs).

I have a love/hate relationship with meatballs. I love meatballs and the idea of meatballs, a small filling finger food which is easy to eat while doing other things.

I hate making meatballs. Everything time, it’s like “oh right, this is a messy and time-consuming project for little finger foods.” The mix is sticky and gets everywhere, trying to roll them into balls is a fiddly, time-consuming process, which never stick together great anyway and it’s just argh, why am I doing this?!

I always forget that I hate making meatballs though, so this seemed like a good place to start my challenge. [I was going to start from the beginning but I really do enjoy eating meatballs. Also we’ve made frumenty several times in the past so that didn’t seem like a good starting point.]

And I can really see how these balls were supposed to turn out. The golden batter on the outside, and then opening it up for the green sage inside and then the golden saffron colour on the inside, these would be really beautiful. If y’know, I had the patience to do that. Which it turns out, I totally don’t. 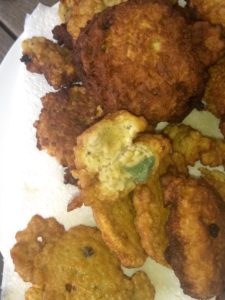 As close as I got

So I used pork mince, which I think was the first mistake. I ended up having to use the food processor in the end anyway in order to get the bits small enough, so if I’d used pork fillets or chunks from a rump, I think I’d have ended up with a more tender, whiter and wetter result. Which would have made the “roll it into little balls” a lot easier and brought out the saffron colour a lot more – which would have given me a better end result.

Re-reading the recipe again, I also think that I should have been using multiple sage leaves for the wrapping in sage leave part, I tried to use just one, and it really didn’t want to hold to the ball mix.

Because the mix didn’t want to be in a ball shape, it also made dipping it in the flour and egg batter mix quite difficult, with the ball often breaking up on dipping. Probably should have added another egg.

In the end, I just made a few big rissoles to get rid of the last of the mix and fried it. Fortunately, since the meat was already thoroughly cooked, there was no chance of food poisoning. 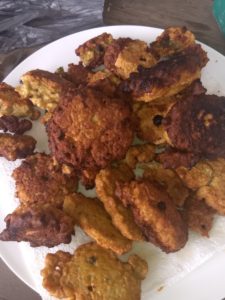